Constance, her Companions, and the Pandemic

We have been fortunate to be able to begin to move towards reentry from the global pandemic caused by the COVID-19 virus. I am so thankful that we have been able to meet again for chapel, classes, and meals at Seminary of the Southwest.

At the same time, I have been dismayed by the way in which response to the pandemic has been harnessed to deepen, rather than lessen, the polarization of discourse in the United States of America – and in some ways throughout the West. I had hoped that sharing a common crisis might have been able to unite us across our divisions. But, instead, it seems as though the Internet, and social media, has made it possible to take an obviously shared threat and use it to entrench and deepen our divisions.

As far as I can tell, it seems that some, on both extremes of the culturally allowed political polarity of American culture, have allowed themselves to fall down rabbit holes of fear. It has made me think of Scott Bader-Saye’s book, Following Jesus in a Culture of Fear, many times. There are times I have wished I could simply hand that book out to people.

One thing that always gives me hope, however, is to look to the lives of the saints as examples and paradigms of faith. One of the first of saints that my mind and heart turned to when we first entered the pandemic was Constance and her companions. These men and women are sometimes called the Martyrs of Memphis.

As Lesser Feasts and Fasts reminds us, in August of 1878 the Yellow Fever swept through the city of Memphis. Within a month the disease had become epidemic, and quarantine was ordered. In that time of panic, many brave men and women, both lay and cleric, remained behind to help. Constance was one of these who remained. She was the superior of the sisters of Saint Mary in Memphis, an Anglican order of nuns. She had come to Memphis to work at a girl’s school. But when the epidemic hit, she did not flee the city like so many of the citizens of Memphis did – especially the wealthy and elite. She stayed behind with those who suffered and became willing to expose herself to disease in order that God’s children would not be left alone in their final hours. In the end she contracted the disease and together with Thecla, Ruth, Francis, and two Roman Catholic priests, the Reverend Charles Parsons and the Reverend Louis Schuyler, succumbed to the disease and died.

We are not all called to be celibate, to be monks and nuns. We do not all enjoy the kind of freedom from responsibility to dependents that monastic discipline grants. Nevertheless, as I reflect on Constance and her companions and their response to the Yellow Fever epidemic in Memphis, I cannot help but see the greatest possible contrast between her response and the polarized responses of our culture, and even in some cases our own Episcopal Church, in the face of our contemporary global pandemic.

I wonder how we might move forward, as we seem to be reentering from Covid-19, by following in the footsteps of Constance and her companions, in ways appropriate to our own vocations and callings?

I wonder how we could push beyond polarized language and discourse and find ways to join together in our on-going, and, I hope, shared response to COVID-19?

I wonder how we might leave behind a culture of fear, and walk together into a culture of love informed by the boldness of our Lord and Savior Jesus Christ? 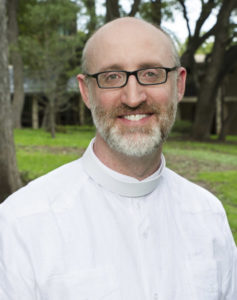 The Rev. Nathan G. Jennings, PhD, a native of Austin, returned to his hometown when he joined the faculty of Seminary of the Southwest in 2005. Jennings is also the Director of Community Worship and has served as the Chair of the Anglican Studies Program at Seminary of the Southwest since 2008. Jennings is interested in liturgical theology, Christian Platonism, Ancient Near-Eastern studies, asceticism, hermeneutics and the way these disciplines intersect and inform one another. His first book, Theology as Ascetic Act: Disciplining Christian Discourse, published in 2010, represents a light revision of his doctoral dissertation and argues that Christian teaching and reflection are embodied acts analogous to, and part of, Christian asceticism. His second book, Liturgy and Theology, Economy and Reality, Wipf and Stock 2017, argues for a Christian metaphysical realism, presenting liturgy as a cosmic gift economy whereby God renders cosmos out of chaos. He is currently working on a book that will provide a an outline of sound liturgical decision-making. In teaching, Jennings reflects on liturgy theologically as that which enables participation in God and God’s work in the world. In addition to the required liturgy and Anglican studies courses, Jennings offers elective seminars in Liturgical Theology, Hermeneutics, and occasional seminars on Anglican Divines.