Taking Crucified Peoples Down From the Cross Today

I heard this morning on the radio that almost a quarter of the population of the US has been fully vaccinated, and almost 40% of us are partially so.  Thinking about how those statistics translate into everyday people’s experiences of life, I found myself hopeful about what our US American context might look like on the other side of the pandemic.  As some have noted in the New York Times and elsewhere, the pandemic has been a kind of apocalypse, an unveiling, a pulling back of the curtain that often obscured the racial, political, and economic disparities that mark our common life in the US.  When I prayerfully consider what post-pandemic life might look like, the impact these disparities have on daily living for the most marginalized among us is at the forefront of my spiritual imagination.

The late Spanish Jesuit priest and theologian Ignacio Ellacuría described those whom unjust social structures affect most acutely as el pueblo crucificado, as crucified people or a crucified community.  He argued that crucified peoples have something in common with Jesus of Nazareth, who suffered the death penalty when the religious and state authorities of his day colluded to find him guilty of blasphemy and sedition.  Ellacuría decried the impact of economic systems that allowed the vast majority of the people of El Salvador, the Central American nation where he spent most of his adult life and priestly ministry, to struggle to eke out a living, with most of its modest wealth concentrated in the hands of las Catorce Familias, the Fourteen Families.  As economic pressures on the poorest of the poor mounted, a civil war broke out, with leftist guerrillas fighting against the Salvadoran military, who protected the oligarchy and the elected officials who allowed the oligarchy’s power to go unchecked.  Through his academic work in theology at the University of Central America (UCA), Ellacuría spoke out against the violence on both sides, advocating for a third way, a way of nonviolence that called on the economically privileged to abandon the lifestyles that kept so many Salvadorans so impoverished.  He crafted a liberation theology that acknowledged the sins of colonialism and their legacy, calling on the Catholic Church of El Salvador to let go of its triumphalism and of its own wealth, encouraging its leaders to practice a different way of being church, a church that is with and for the poor.

On November 16, 1989, Ellacuría, his brother Jesuits with whom he lived in the UCA rectory, their housekeeper Elba Ramos, and her sixteen-year-old daughter Celina, who had sought refuge from the fighting in the streets the night before, were forced out of their home and onto the front lawn, where they were assassinated by members of the Salvadoran military.  These priests were put to death because their ideas were dangerous, because they had the audacity to abandon their own privileges to walk alongside Elba, Celina, and other economically poor people in the midst of the Salvadoran Civil War.

Jon Sobrino, another Spanish Jesuit priest who was a member of the UCA Jesuit community, had been traveling here in the US when his brother Jesuits, Elba, and Celina, were killed.  Upon his return to San Salvador, he continued to tell the story of the martyrs of the UCA, to write about the legacy of Ellacuría, and to make his own contributions to Latin American liberation theology.  He is best known for Christological tomes like Jesus the Liberator and Christ the Liberator, but his text that affected my spiritual life most profoundly is a skinny blue paperback, the title of which translates to English as, The Principle of Mercy: Taking the Crucified People from the Cross. In it, Sobrino offers theological reflections on mercy and solidarity, calling Christians to a witness of discipleship that takes the crucified peoples down from their crosses, that refuses to allow unjust structures like those that crucified Jesus of Nazareth to continue to put to death so many today who are considered the economic, political, religious, and ethnic “other.” He invites Christians in our own time to get in the way of the death-dealing work of these structures of sin, to practice mercy with and solidarity alongside members of crucified communities.

I’ve been sitting with the implications of Ellacuría’s and Sobrino’s words and witnesses this past Holy Week, as the trial of Derek Chauvin began in Minneapolis.  Following its coverage, I am reminded of some of George Floyd’s last words: “I can’t move.”  “Mama.”  “Some water or something.”  “Please.”  “I can’t breathe.”  George Floyd suffered the same fate of all too many others—of Brianna Taylor, Ahmaud Arbery, Michael Brown, Trayvon Martin, Sandra Bland, Atatiana Jefferson, Philando Castile, Eric Garner, Amadou Diallo, Michael Ramos, que en paz descansen—a crucified community those who testify to the love of the Christ who rises are called to take down from the cross.

Last fall, I was buoyed by many of the reflections shared here on the Sowing Holy Questions blog, posts that introduced us to spiritual practices that can root our commitments to anti-racism.  In “Soul Afire,” Megan Allen wrote, “So often when we speak of reconciliation and healing, we exclude ourselves from the equation. Afraid of our own brokenness, we focus our attention outward in an attempt to save others from feeling the same pain we feel and often refuse to acknowledge to ourselves. How can we seek to bring true healing to the world if we ourselves are not willing to receive the healing power of Jesus Christ?”  Similarly, Derek Larson reminded us that “the work of racial justice…involves just as much inner work as it does outer. The work of racial healing is a contemplative practice as well as a social and active practice, which requires us to look deep within and learn how to let go of the destructive and racist influences by which our egos have been shaped.”  Many of us in the Southwest community have committed ourselves anew to spiritual practices of anti-racism over this past year, rooting ourselves in the healing and contemplative work necessary to sustain these commitments.

Today, I am curious about what it might mean for us to begin to take crucified peoples down from the cross.  What strategies, what skills might we cultivate to aid us in this work that Megan and Derek rightfully remind us calls us inward, as well as outward?  While it may not seem this way just now, on the cusp of what some are describing as the fourth wave of the pandemic, this time of death-dealing illness, this time of great unveiling will, with time and effort, I trust, come to an end.  How will these months of physical distancing, masking, and hand washing change us?  In our seminary community’s tradition of small experiments, what everyday practices might we start to develop today that can support us in guarding against the temptation to forget what has been revealed by the pandemic for all to see?  How might we work together to begin to practice mercy, to take the crucified peoples down from their cross? 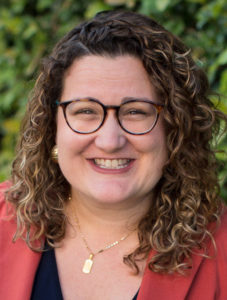 is a Latina Catholic theologian. Her academic writing has appeared in the International Journal of Practical Theology, and she co-edited From the Pews in the Back: Young Women and Catholicism, which Liturgical Press published in 2009. Other popular pieces can be found online at Patheos, God’s Politics, and Busted Halo. With ministerial experience in Catholic contexts across the United States, she also offers professional development opportunities for those in ministry. Having studied at Loyola Marymount University, Harvard Divinity School, and the Graduate Theological Union, Jennifer defended her dissertation, which explores the implications of devotion to la Virgen de Guadalupe at a Latinx Catholic parish for Mariology and for ministry, in August 2018. During academic years 2018–2020, she is participating in a postdoctoral fellowship through the Louisville Institute at Austin Presbyterian Theological Seminary, where she served as visiting assistant professor of constructive theology.