Reflections on Beloved Community by Spiritual Integration in Counseling Scholars

I grew up in Nigeria, a country with a collectivist culture. Everyone looked out for one another, and it truly took a village to raise a child. The matriarch of my family, my grandmother, was well-known in her village for her open arms and open doors policy. People throughout her community, no matter who they were, knew that they could always get a warm meal and a generous welcome in her home. My grandmother took care of sick neighbors, sent meals to new mothers, and was an educator at the local school. In times of familial disputes amongst locals, she was often called upon to be the mediator in helping to resolve these conflicts. My grandmother, Jane Ekwukwo Nwachi, was a strong pillar in her community, and she was the epitome of loving thy neighbor and instilled this value in all her children.

When my mother left her village and moved to a diverse city, although we were all Black, there were people from different regions, tribes, and religions. Nevertheless, she carried on the values instilled in her. My mother learned greetings in other major languages (Yoruba, Hausa, Edo) and welcomed different kinds of people into her home, often referring to them as “brother” or “sister”. Observing my grandmother and my mother, I saw firsthand what beloved community means. I grew up with people I considered family although we did not share the same blood, language, or religion. I watched adults respectfully confront each other when one of them had taken offense. During times of political turmoil (which is basically every day in Nigeria), I saw my mother fervently debate her friends with opposing views, and still offer them a meal and hug them on their way out. If Beloved Community is an all-inclusive sisterhood and brotherhood absent of bigotry and prejudice, then I was nurtured in Beloved Community since birth.

When we immigrated to America, my mother continued this spirit of sisterhood even with the addition of racial relations.This attitude made it easy to adjust and be in a community with both Black and White people. However, a few years ago, I veered off the path set before me by my grandmother and my mother. What changed? God calls us to love our neighbor regardless of race, political affiliation, or culture. Somewhere along the way, amid race riots and social justice movements, I lost focus of what I learned growing up, and my heart slowly hardened. Why would I foster beloved community when there are people in America who refuse to be in community with me? In these dark moments, I remembered that Jesus was persecuted by many but still chose Love. Even on the cross, Jesus’s love never wavered. Jesus called me to love and lead with grace. I can say that I have refocused on what the true essence of life is.

Today, as a student on the journey to becoming a counselor, the call to foster beloved community intensifies. As a counselor, I will encounter clients of different races, backgrounds, and religions. My professors teach that in order to be a good counselor, I need to know and recognize my own bias and bracket that when I counsel. As a counselor, I must hold up the mirror and search myself. I have to continue to heal and grow. As a result of that growth, I will be of useful service to my clients, accepting those in need with love, just like my grandmother and my mother.

For me, Beloved Community didn’t’ begin with MLK’s vision of society. Instead, I think of the 1987 novel by Toni Morrison, Beloved, in which readers consider the ramifications of forced silence. What happens when humans are unable to tell their story? The book centers around the forgotten lives of slaves in the American mythos. The book’s ostracized protagonist, Sethe, tries to murder her children as an act of love. She wants to protect them from the brutality of slavery she reexperiences daily in her memories. But then the mysterious character, Beloved, emerges from a lake as a ghostlike character adorned in white on Sethe’s doorstep. Beloved recounts past slave stories and brings Sethe’s repressed trauma to the surface.

Martin Luther King’s version of Beloved Community casts a vision of society that promotes justice and equality. Though admittedly (especially as a Literature Teacher), I am weary of utopian visions because, as literature and life often reflect, these visions are quite dangerous and harm humanity in the name of goodness. King’s vision, however, is not a utopian ideal but a hopeful and achievable vision of life. What prevents King’s vision from becoming Orwellian is a view of humanity on the individual and collective level as sacred. King’s vision is personal rather than authoritarian; it is intrinsic rather than legislated. Common good naturally arises from viewing individuals, humanity, and creation as sacred. It is seeing the imago Dei in ourselves and others.

In John’s Gospel, the disciple refers to himself as “the one who Jesus loved,” recognizing he is beloved. He internalizes meaning, purpose, and significance as the byproduct of Yahweh’s love. This distinct vision of Beloved Community inhabits a future hope and responds to the released and forgotten stories of the past. Allowing the collective repressed trauma of humanity to heal becomes a catalyst for change. As my favorite songwriter, Bob Marley, wrote, “In this bright future, you can’t forget your past.” So may our stories be a force of reconciliation and restoration.

A Beloved Community that Invites Us To First Turn Inward- Jacqueline Vidal:

As a current high school educator, I believe that the idea of a Beloved Community lies at the heart of the work that we do with children. For many educators, our hopes for a better world and future for our students fuels our desire to show up everyday. Many passionate educators I have known over the years not only teach content but also character in the hopes that our students will gain the skills and knowledge they need to become empowered toward positive change. Both modeling and teaching young people how to have tough conversations in the classroom with people they don’t agree with is one of the hardest things a teacher will ever have to facilitate in the classroom. I believe that our hopes and desired outcomes are indeed rooted in many of the facets of social and interpersonal change that Josiah Royce’s conception of Beloved Community puts forth and to have these hopes, in my opinion, is to have a greater purpose.

As a Latina counseling student who is passionate about working with the Latinx community, I find myself thinking about what working toward a Beloved Community might mean or look like for me and my community and those that will soon trust me to walk with them for a moment on their life’s journey. For me, this idea of Beloved Community invites me to first turn inward. Inward into an exploration of identity and the masks behind which we hide our most private and pained selves from others. Inward into my vulnerable, authentic sea of Self and, as my favorite Lebanese-American poet Kahlil Gibran once penned, into “a human chaos, a nebula of confused elements”.

I wholeheartedly agree and believe that before we can embrace the idea of nonviolence and change of these power dynamics with others, we must first learn to embrace that same idea within ourselves and for ourselves. We must learn to love and listen to those parts of us that we have grown into conflict with in an effort to survive in this world and that for many are filled with hatred and brutality. How else are we to be strong enough and aware enough to change policies and systems that are unjust? As human beings, conflict with others is inevitable and much of that conflict has strong and often unrecognizable roots in colonization, genocide, settlement and empire. For many communities, this conflict has been internalized in many ways and for me, I believe that this inner work is a critical requirement for membership in a global Beloved Community that cares about human dignity and social justice.

As a counseling student, I believe that if I can learn how to guide others toward the tools they’ll need to resolve that internal conflict peacefully, nonviolently and without hostility and resentment, there is a better chance that they will then put that same energy out into the world with their hearts and minds and through their actions, beliefs and behaviors. I believe all of us can do the work of inner exploration and awareness and will hopefully find those parts of us that carry the greed, prejudices, false narratives, and blame. And as we begin to diminish the competing forces within ourselves, instead offering compassion and kindness to ourselves and changing our own internal power dynamics, we can then turn outward into the world, more prepared to be a contributing part of a global Beloved Community of compassionate beings.

I’ll end with another line from one of my favorite poems on Self-knowledge by Gibran, one that speaks to the depths of our inner treasure and capacity as compassionate beings, once all of the muck has been mucked from our boundless and measureless sea of Self.

“And the treasure of your infinite depths would be revealed to your eyes.
But let there be no scales to weigh your unknown treasure;
And seek not the depths of your knowledge with staff or sounding line.
For Self is a sea boundless and measureless.”
-K. Gibran 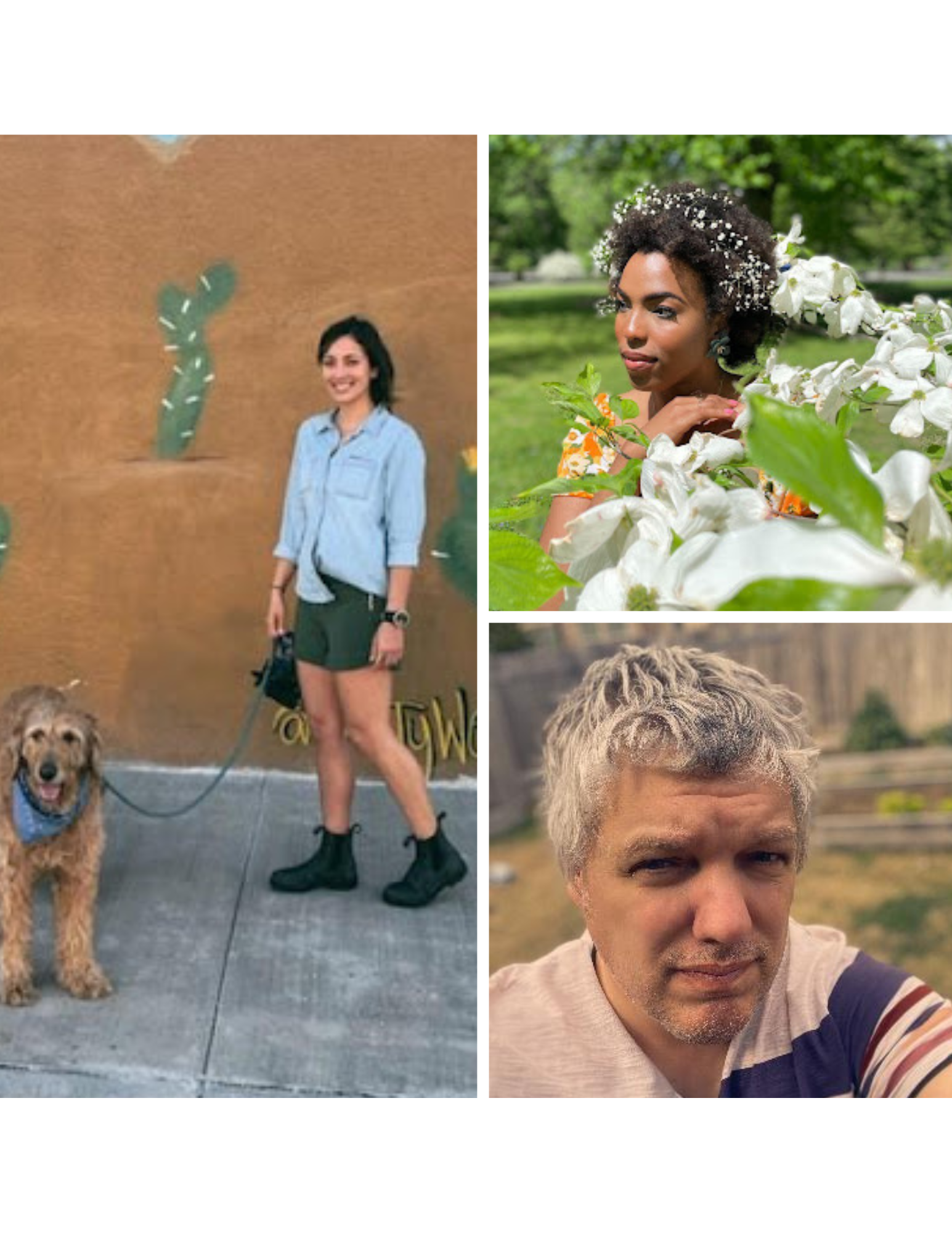 Jane Obi, John Thomas, and Jacqueline Vidal are three current Spiritual Integration in Counseling (SIC) Scholars in their middler year. The SIC Scholars program here at Seminary of the Southwest is composed of current graduate students in the Clinical Mental Health Counseling program and recent alumni. SIC Scholars explore how spirituality and psychology intertwine, overlap, and impact the experience and worldview of both clients and clinicians. In addition, SIC Scholars have the opportunity to research, write, and present on topics within spiritual integration in counseling. Additional resources on spiritual integration in counseling can be found in our LibGuide.